Christ as Alpha and Omega


The Greeks recognized that hieroglyphs were symbolic and depicted the esoteric theology of the ancient Egyptian priests. In fact, the word hiero is derived from the word hiereus, meaning priest. The priests were wise in astronomy, geometry, animal behavior, medicine and metaphysics. That Helioplois was a center of astronomical knowledge is reflected in the high priest's title, “Chief of Observers” or “Greatest of Seers."

When Herodotus visited the priests at Heliopolis (449-440 B.C.) he praised them for their wisdom. When Strabo visited in 25 B.C., he wrote "At Heliopolis we saw large buildings in which the priests lived. For it was said that anciently this was the principal residence of the priests, who studied philosophy and astronomy." This suggests that the esoteric knowledge of the ancient Heliopolitan priests was by Herodotus' time lost or obscured by the prevalent Hellenistic worldview.


Plotinus, a 4th-century A.D. Egyptian-born philosopher, interpreted hieroglyphic writing from the viewpoint of his priestly training under Ammonius Saccas, a priest of Heliopolis.[1] It is not clear how well Ammonius understood the meaning of the hieroglyphic writings, but his association with Heliopolis and his name, which means Teacher, suggest that he was recognized as a learned man.

Heliopolis is the Greek name for the ancient Nile shrine which was dedicated to Horus. The Egyptian name was lunu, which means "place of pillars" because the temples were constructed with many wooden pillars. Arabs call the place Ain Shams, which means "the well of the Sun." The well was the Nile and when the Sun rested over the waters at noon, it was midway between the mountains on the east of the Nile and the mountains on the west.


According to Egyptologist Maspero, King Khufu, the builder of the Great Pyramid of Giza, investigated the earlier sources of the Pyramid Texts. Maspero notes that “the likeness between what was copied in the various Pyramid Texts suggests that some of their information were directly derived from old written sources." Those sources are represented by the pictographs found at Hierakonpolis (Nekhen).
There is evidence that Horus was regarded as the beginning (alpha) and the end (omega). The beginning and the end of each day was symbolized by a double lion (Aker). In the New Kingdom, the lion was sometimes pictured as a falcon and called Hor-em-akhet ("Horus in the Horizon") because Horus' emblem is the Sun. At the earlier Horus shrine in Hierakonpolis Horus was also known as "Nekheny", meaning falcon.


Hor-em-akhet (Horus) was represented as a child, a falcon, or as the leonine sphinx. The great east-facing Sphinx of Giza was viewed as "Horus in the Horizon" and it lay between the twin peaks of the giant akhet (horizon/mountain) formed by the pyramid of Khufu and the horizon/mountain of the pyramid of Khafre). In the relief scene carved on the "Sphinx Stele" at Giza, Tuthmosis IV is shown making offerings to twin sphinxes which represent the aspects of Horus in the Horizons. Horus' name appears above the animals' heads. These sphinxes are placed back to back with the winged sun disk above and between them, depicting Horus at the sacred center.Horus who is the beginning (east) and the end (west) is also present at the center (the eternal). 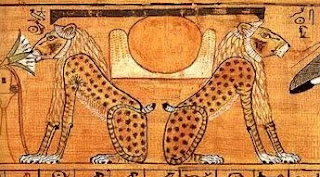 The Jews who affirmed Jesus as the Son of God thought in the language and symbols of the Phoenician Canannites. John McClintock observes, "The Hebrews adopted Phoenician as their own language, or, in otherwords, that which is called [ancient] Hebrew language was in fact "the language of Canaan." It is not merely poetic but literal and in the philological truth. One of the proofs for this is taken from the Bible itself: Isaiah 19:18 says "In that day five cities in Egypt will speak the language of Canaan and swear allegiance to the LORD Almighty. One of them will be called the City of Destruction -- City of the Sun (that is, Heliopolis). --John McClintock, Cyclopaedia of Biblical, Theological, and Ecclesiastical Literature
Posted by Alice C. Linsley at 7:25 AM