Haplogroups of Interest to Biblical Anthropologists

In human mitochondrial genetics, L is the mitochondrial DNA macro-haplogroup that is at the root of the human mtDNA phylogenetic tree. As such, it represents the most ancestral mitochondrial lineage of all currently living modern humans. All modern humans have ancestry that is traced to Africa.

It is evident that from the beginning there was great genetic diversity among human populations living in Africa, especially among peoples living along the Nile. 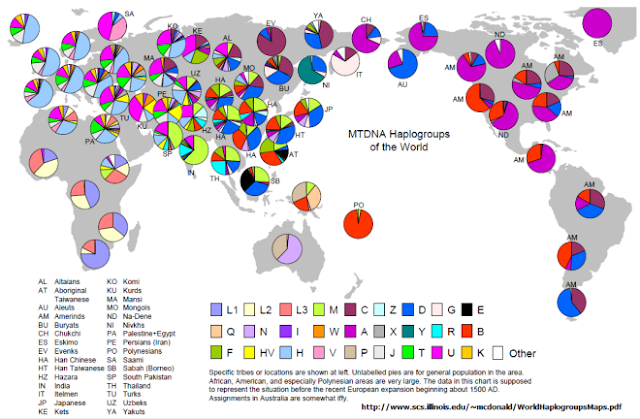 The diversity was found even among closely related people, such as the black and red Nubians. They appear on many ancient paintings, such as this detail found on an ancient Egyptian monument. The red and black Nubians represent a kinship moiety. that is they consituted one people divided into two ritual groups. Each group maintained its own shrines, though both groups served the same king and worshiped the same High God.


The majority of biblical populations are in Y-DNA Haplogroup R1 which is found widely in Africa, the Midle East, Pakistan, the Levant, Southern Europe, France, and the British Isles. The dispersion of R1 peoples took place over thousands of years, beginning before 70,000 years ago. 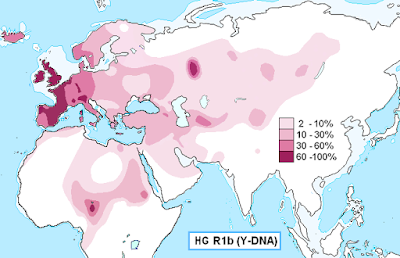 The dark red spot in the center of Africa is the region of Lake Chad, Noah's homeland. Noah and his descendants are in the R1b Haplogroup.

Haplogroup R1b, also known as haplogroup R-M343, is the most frequently occurring Y chromosome haplogroup in Western Europe, some parts of Russia (the Bashkir minority), Central Asia (e.g. Turkmenistan) and in the region of Lake Chad, and along the Nile.

This is the haplogroup of Abraham's Proto-Saharan ancestors who dispersed widely and are known my many different names in ancient history: Kushites, Kushan, Ainu, Saka, Hittites, etc. Among them was a caste of priests known in ancient texts as 'Apiru, Abrutu, Hapiru, Habiru or Hebrew. In the Akkadian language this caste or priests was called "Abrutu" from Abru, the word for priest.

The Abrutu are named in ancient Akkadian texts The word refers to a caste of priests who were already widely dispersed in the 14th-13th centuries B.C. Their spread was driven by their marriage and ascendancy pattern by which sons were sent away to establish their own territories.

Anthropological study of the Hebrew suggests that this is the oldest term for this select order of ruler-priests. The term"Israelite" comes later. It appears on the Merneptah Stele, dated to c. 1219 B.C. This stele set up by Pharaoh Merneptah is the earliest extra biblical record of a people group called Israel.

Abraham's Habiru ancestors served at the Sun temples across the vast ancient Afro-Asiatic world. Some of the Habiru were Horites. The Horite Hebrew priests were devotees of Horus, the son of Ra. The oldest site of Horus worship is Nekhen (Hierakonpolis) in Sudan (4000-3000 B.C.). Votive instruments at Nekhen were ten times larger than the mace heads and bowls found elsewhere, suggesting that this was a very prestigious shrine.

The Bible speaks of the R1 rulers as "the mighty men of old." They were Afro-Asiatic kingdom builders who built cities, shrines and temples, and they controlled commerce on the major water systems and along the mountain ridges (the high places). They migrated out of the Wet Sahara and the Nile Valley in different directions, but the main movement was to the northeast.

Related reading: The Fiction of Racial Types; The Bible and the Question of Race; Why Nekhen is Anthropologically Significant; Was Noah Mesopotamian or Proto-Saharan?; Totems and Tracing the Horite Hebrew in History; The Sub-Saharan DNA of Modern Jews; Hebrew, Israelite or Jew?