The oldest expressions of religious tradition are those that are found most universally among indigenous peoples and ancient castes. These religions value the traditions received from their ancestors and seek to preserve the received tradition. Even modern religions are based on older traditions. In fact, religion, whether organic or synthetic, requires some received tradition.

Study of the ancient Afro-Asiatic Dominion indicates common linguistics roots for some of the most fundamental concepts found in primitive religion, such as blood, water, sun, ruler, river, valley and mountain or rock shelter. The antiquity of communication about these is evident in the pre-alphabetic symbols V, T, X, O and Y.

Anthropological study has identified certain traits common to indigenous religions. These include ancestor veneration, henotheism, and divine appointment of rulers.

Indigenous expressions of religion include stories about the first parents or founders of the community. In the Bible, Adam and Eve are an example of the first parents venerated among Abraham's Nilo-Saharan ancestors. Adam was a red man and the people living in the land where Abraham established his territory were known by the ancient Greeks to have a distinctive red skin tone. Therefore the land was called Edom, a reference to the color of blood (dm in Hebrew). The Bible describes at least two of Abraham's descendants has red: Esau and David. (The rulers of Edom are listed in Genesis 36.)

Tradition is respected in the religions of indigenous peoples. The tradition received from the ancestors is regarded as sacred and to be preserved and passed from generation to generation. Additionally, those from whom the tradition was received, the ancestors, are also respected, even venerated. This is especially true in the case of rulers and founders. The universality of this phenomena indicates its extreme antiquity.

In the image above, the wearer carries a knob stick as a symbol of the ruler's authority. This mask is also considered to be that of the shepherd and the stick might also have the shape of a shepherd crook. The crook and the flail were symbols of the Pharaoh's authority in ancient Egypt. Today bishops and archbishops carry the shepherd's crook as they process in and out of the churches. 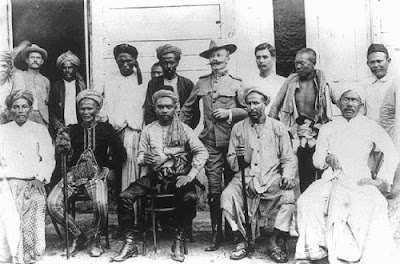 The traditional mask from Slovakia (below) is called Dedo (Grandfather, Ancestor) or Stari (Old man, Ancestor). This mask is worn during Faste or Fašiangy celebrations which take place between the last Sunday before Lent until Tuesday night or the morning of Ash Wednesday. The mask is made from sheep skin and is decorated with wheat. Wheat threshing was associated with the sun, the emblem of the Creator. 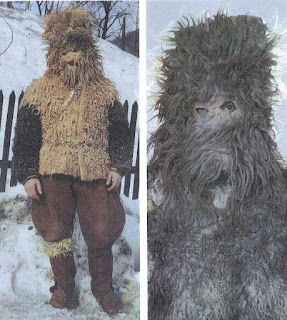 The words Starac, Stari, Djed, Did mean old ones, grandfather, or ancestor. They can also indicate a spiritually wise elder, a priest, and even an ancestral spirit that protects the home or a local shrine.


Henotheism and the Binary Worldview

Most indigenous religions are henotheistic. Henotheistic religions honor one supreme creator God who is assisted by lesser supernatural powers. The angels as supernatural messengers represent an element of henotheism in Judaism and Christianity. In many religions, the lesser assisting deities or powers are related to nature. The ancient Egyptians, Greeks and Romans believed that each of the great rivers had a deity. The Celts and Vikings venerated deities of the sky and thunder.

Even in religions which honor complementary gods (a binary set), as do the BaKuta of central Africa, one of the gods is regarded as superior or victorious over the other. In the BaKuta stories Nzambi-above rules over all the earth and Nzambi-below goes away. This binary feature is common in African traditional religions and also characterizes the Hebrew worldview: heaven is greater than earth; the male is larger and stronger than the female, and the sun is the "greater light," being superior to the moon which merely reflects the sun's light.

The binary worldview is distinct from the dualistic worldview of most Asian religions. In a dualistic worldview the entities of the binary set are regarded as complementary and equal. This is symbolized by the ying-yang. In dualism, reality is comprised of opposite and equal principles (male-female, night-day, spirit-matter, Creator-creature). One entity in the binary set is not seen as greater than the other. In this worldview the idea that humans need a higher power is meaningless. There is no need for divine condescension; no reason for God in Christ to take on flesh and enter time and space.

In the Hebrew Scriptures we read about gods - elohiym. The term is used two ways. In Genesis 1, we read: "In the beginning Elohiym (the gods) created the heavens and the earth." This speaks of the Supreme Creator as a plurality. Some see the doctrine of the Trinity here, and indeed, there was an ancient reference to the Three-God among the peoples of Palestine - Baal Shalisha. This may be what stands behind the narrative of the Lord God visiting Abraham at Mamre as three persons (Gen. 18).

Genesis 6:2 speaks of the "sons of the Elohiym" who took wives from the daughters of men. This refers to the Creator's divinely appointed rulers on earth. They are also called the Anakim or Anakites (Numbers 13:33), "the mighty men of old" (Gen. ), and gibboriym, meaning powerful ones (Gen. 6).

In Exodus 22:28, these deified rulers are called gods: "Thou shalt not revile the gods (elohiym), nor curse the ruler of thy people."

Here the term elohyim refers to the ruler-priests, a caste which dispersed widely in service of their kingdom-building rulers. They were expected to reflect the divine image more than other people. Rulers were appointed by God's authority to restrain evil, to establish justice and to reward those who do what is good. They act not only on God's behalf; they act as “gods” on earth. Consider the following references in the Hebrew Scriptures:

Psalm 82:1-6 says that the rulers of Israel, the gods, have failed to reflect the divine image as God's earthly representatives.

Psalm 82:1-2 - "God presides in the great assembly; he gives judgment among the gods [rulers]. How long will you judge unjustly, And show partiality to the wicked?”

Here God judges the rulers in the midst of the rulers, the elohyim/gods who comprise the divine council. Verse 2 identifies the rulers as those to be judged.

In Psalm 72 the deified rulers are called shaphat, a name associated with the Horites in Numbers 14:5. One of the spies sent into Canaan was Shaphat ben Hori.

Psalm 58:1,2 - "Do you indeed speak righteousness, O gods? Do you judge uprightly, O sons of men? No, in heart you work unrighteousness; on earth you weigh out the violence of your hands."

The tradition of deified rulers as the "sons"of God is very ancient. It was found among the earliest Nilo-Saharan rulers even before the first Egyptian dynasties.

Among the cattle-herding Nilo-Saharans, the High God's appointment of a ruler was indicated by the sun's overshadowing. This was shown in ancient images as the sun resting in the cow's horns, as in this image of Hathor, the mother of Horus, who was called the "son" of the Creator. 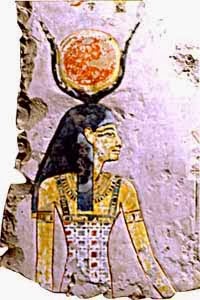 The Y is a solar cradle that designates a divinely appointed "son" of God. That is why many of the biblical rulers have names that begin with Y: Yaqtan (Joktan), Yacob (Jacob), Yistzak (Isaac),Yosef (Joseph) Yetro (Jethro), Yishai (Jesse), and Yeshua (Joshua/Jesus).

The idea of divine appointment spread with the Kushite expansion out of the Nile Valley. In Mesopotamia, Sargon I claimed to have been born of a virgin who was overshadowed by the High God. Sargon was born in an O-piru, a Sun temple. His home city was called Azu-piranu, meaning Anu House of Azu. The Creator was called Azu in Akkadian; Asa in Chadic; Asha in Kushitic; Ashai in Hebrew, and a priest in Jerusalem carried the name Amashai (Neh. 11:13).

Related reading: Some Marks of Prehistoric Religion; Ancient Moral Codes; Ethics of Archaic Communities; The Religion of the Saka; A Tent for the Sun; Binary Sets and Gender Distinctions; Why Cows Were Sacred in the Ancient World; The Urheimat of the Canaanite Y