The Hebrew were a Caste

This smith in Niger performs a mock attack with bellows on the house of a man who attempted to do metal work, thus threatening the metal worker's job security. National Geographic, Aug. 1979 (p. 289)

Castes are a strict social stratification that made it impossible to change one’s status in the ancient world. Castes were viewed as having been established by God in the beginning. This belief is expressed in the Bhagavad Gita, a first century A.D. Hindu text. Krishna declares that he has become incarnate, and that “The four castes were created by me.” In the Laws of Manu (ca. 250 B.C.) the castes are elaborated as the primeval divine creation.
In the Rig Veda, dating to about 3000 years ago, four castes are mentioned. The most prestigious are the Brahmans (priestly and intellectual class); then the Kshatriyas (ruler and warrior class); then the Vaisyas (farmers and artisans) and the lowest caste are the Sudras (the “untouchables”). Many sub-castes exist under these, making it difficult to identify one’s equal or one superior.
Today castes are regarded as negative forms of social segregation and discrimination. However, in the ancient world the caste system protected each group's identity and provided job security. Only potters were allowed to make and sell pots. Only tanners were allowed to skin and sell hides. Only priests were allowed to perform sacred temple duties. The later temple guilds reflect the earlier caste organization.
Why the Hebrew are not named in the Table of Nations (Gen. 10)
It has been noted that the Hebrew are not listed among the peoples named in the Genesis 10 ethnography. The most obvious explanation is that the Hebrew were not an ethnic group, but rather a caste. The Table of Nations does not recognize any castes because it comes from a late source and a time when Jews were widely dispersed among the nations.
Some argue that the Hebrew are the descendants of Eber, but that is not the origin of the term Hebrew. The term comes from the ancient Akkadian word for priest - abru, and the Akkadian term for the caste was abrutu. These priests were dispersed in the service of the early kingdom builders such as Nimrod the Kushite.
The earliest Hebrew ruler-priests named in the Bible are listed in Genesis 4 and 5. These are the descendants of Cain and Seth, whose descendants intermarried (endogamy). This diagram shows that Lamech the Elder's daughter married her patrilineal cousin Methuselah and named their first-born son Lamech after her father according to the cousin bride's naming prerogative. 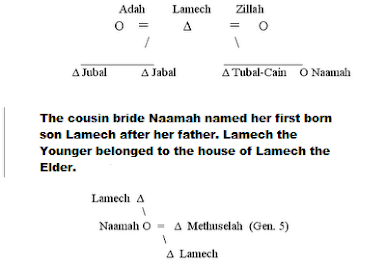 The Hebrew ruler-priests married two wives. The cousin bride was usually the second wife, and she often named her first-born son after her father. In the diagram we find Lamech the Elder (Gen. 4), father of Naamah, and Lamech the Younger (Gen.5), son of Naamah. The cousin bride’s naming prerogative makes it possible to trace descent through the maternal line in the Bible.
The Traits of a Caste

Anthropological study of the biblical Hebrew indicates that the early Hebrew were a caste. Their social structure is characterized by these traits of castes: endogamy, membership by birth, hierarchical status, inherited occupation, appearance such as shaved bodies, distinctive clothing, circumcision, and restraints on eating with persons outside the caste.

The term “commensality” refers to the positive social interactions that are associated with people eating together. Communal meals encourage conversation, increase familiarity, and can lead to closer social, familial, and marital relations.

Commensality is discouraged in castes for various reasons. The ancient Egyptian rulers observed restrictions on eating with those regarded as ritually impure (Gen. 43). The practice of not eating with Gentiles continues today among strict Orthodox Jews. The prohibition is meant to discourage social mingling that can lead to marriage outside the caste.

Exceptions were made in diplomatic relations. Hebrew rulers feasted with non-Hebrew rulers to formalize treaties and covenants. The feasts usually took place at sacred high places and were accompanied by animal sacrifice. Scholars have learned much about ancient treaties through the study of the Mari Tablets (Mesopotamia), the Pact of Esarhaddon (Assyrian), the Amarna Texts (Egyptian), and the Egyptian-Hittite Peace Treaty.

Some of these pacts are not between equals. Many represent covenants between high kings and vassals. That is the case with the covenant made by God in Genesis 15. It is the Lord God himself who passes between the animal halves while Abraham beholds this miraculous vision. The LORD reminds Abraham of all his faithfulness to him: "I am the Lord who brought you here from Ur.” (Gen. 15:7) “I am your Shield; your reward shall be very great." (Gen. 15:1)

The Antiquity of the Hebrew caste

The Hebrew are probably the oldest known caste. They served at shrines, temples, and mortuary sites at least 1000 years before the caste system of India emerged. The Nilotic Hebrew had a moiety system. The Horite and Sethite Hebrew maintained separate shrines and temples. They were one caste organized into two ritual groups.

During the pre-dynastic period and the Old Kingdom (ca. 2575-2130 BC) the Hebrew priests were organized in groups called "phyles." Each phyle served a two-week duration before returning home. The later organization of priests in Israel appears to have developed from the phyle system.

There were twenty-four divisions or “courses” of priests in Israel. These are listed in 1 Chronicles 24:7-18. Each course served in rotation twice a year for a duration of one week. The priests lived in Jerusalem and throughout the land of Israel. When it came time for the division to go up to Jerusalem, the priests left their homes and returned after their term of service. When not functioning as a priest, these individuals went about their normal routines, tending to their various occupations: stone masons, miners, tomb builders, carpenters, potters, tent makers, shepherds, goatherds, farmers, merchants, and smiths.

Two priestly divisions are of special interest: the eight division of Abijah, and the eighteenth division of Happizzez (1 Chron. 24:15). According to Luke 1:39, Abijah lived near Jerusalem in the "hill country” in a city of Judah. Zacharias, the father of John the Forerunner, belonged to the division of Abijah (Luke 1:5-7). Rabbinic literature claims that at age thirty, “John the Immerser” was commissioned as a priest to serve in the same division as his father.

The division of Happizzez was based in Nazareth. This was the division to which Joseph belonged. Joseph, the husband of Mary, was named for his ancestor Joseph, the son of Mattathias (Luke 3:24-25). Mary, the mother of Jesus, was Joseph’s cousin bride. She was of a priestly division also. Her father Joachim was a priest of Nazareth. He married Anna, the daughter of Matthan, a priest of Bethlehem. Matthan had three daughters: Mary, Zoia, and Anna. Mary and Zoia resided in Bethlehem. Zoia was the mother of Elizabeth, and the grandmother of John the Forerunner. Anna miraculously conceived in her old age and gave birth to Mary, the mother of Jesus.

Matthan is related to the names Mattatha, Matthat, Mattathias, Mattaniah, Mattai, and Matthew. The name, with its variant spellings, appears five times in Luke’s list of Jesus’ ancestors (Luke 3:23-38). The name derives from the word for “gift.” Mattaniah means “gift of God” and is a name found among priests in I Chronicles 25:3-4. The name also may refer to the giving of wisdom which is “Maat” in ancient Egyptian. A priest named Maath is listed in Luke 3:26.

All these ancestors of Jesus were high-ranking individuals in their communities and heirs to the customs of their ruler-priest forebearers. The earliest of those ancestors are named in the king lists of Genesis 4 and 5. Their historicity has been demonstrated through kinship analysis.