Pursuing Truth as Persons of Faith 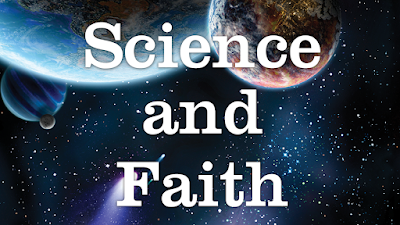 
"The ignorance of Scripture is a great cliff and a deep abyss; to know nothing of the divine laws is a great betrayal of salvation. This has given birth to heresies, this has introduced a corrupt way of life, this has put down the things above. For it is impossible, impossible for anyone to depart without benefit if he reads continually with attention."- St. John Chrysostom (d. 407 AD)


If Scripture is reliable and the empirical method is valuable, shouldn't the two work together for those who sincerely want to understand the Bible?

It is often said that faith assertions cannot be proven by science, but that is a fallacy. A reader once wrote to tell me, "Science and beliefs do not mix." I responded that "Science begins in belief. One must believe something even to think scientifically."

Another reader shot off this remark, "The Bible and theology are not the enemy of the biological evolution; they are superfluous."

That's the sort of brainless remark one reads at many science sites "where graduate students, researchers, doctors and the 'skeptical community' go not to interpret data or review experiments but to chip off one-liners, promote their books and jeer at smokers, fat people and churchgoers? And can anyone who still enjoys this class-inflected bloodsport tell me why it has to happen under the banner of science?" -- Virginia Heffernan, The New York Times Magazine

Science, at its best, points us to what is real and true. Because that is so, we can expect good science to verify, confirm, and align with the data of Scripture. When something true is asserted evidence can be found to confirm the assertion.

Christians have nothing to fear from science. In a study published by the American Scientific Affiliation, it is estimated that 60% of the breakthroughs in science and technology have been made by persons professing to be Christian.

Ian Hutchinson, one of the world's leading plasma physicists, has written:


"MIT, my home institution, the high-temple of science and technology in the United States, has a pseudo-Greek temple architecture about its main buildings. The fluted columns are topped not with baccanalian freizes, but with the names of the historical heroes of science (not to mention William Barton Rogers, the founder). A rough assessment was carried out by a few of us some years ago of the fraction of the people listed there who were Christians. The estimate we arrived at was about 60%."

In botany and nutrition, we find Hildegard of Bingen (1098-1179), George Washington Carver (1864-1943), and Ann Marie Thro. Ann is a senior advisor for Plant Health Production and Products with the National Institute for Food and Agriculture.

Astronomy found an early advocate in Agnes Giberne (1845-1939). Georges Lemaître (1894--1966) advanced understanding of astrophysics as a Roman Catholic priest. Jennifer Wiseman is a NASA astronomer who discovered periodic comet 114P/Wiseman-Skiff while working as a research assistant in January 1987. Jennifer often speaks in public on the relationship of faith and science.

Christians have broken ground in mathematics also. Maria Gaetana Agnesi (1718-1799) developed a comprehensive treatment of algebra, including the foundations of integral and differential calculus. Computers came into existence largely because of the mathematical genius of Sister Mary Celine Fasenmyer (1906-1996). Her hypergeometric polynomial sequences are the progenitor of the computerized methods used today to prove hypergeometric identities.

All of these remarkable figures expressed commitment to Jesus Christ and to excellence in their fields. None would say that the Christian faith and their research were incompatible.

So why do many assume that Science and Scripture are in conflict? We do so because data requires human interpretation and interpretation is influenced by the ego and by various agendas.

Dr. John Hawks, a world-renown paleoanthropologist, acknowledges the role ego plays in anthropological nomenclature. He noted that arguing about species has more to do with ego than with morphological evidence. At his website he wrote:


"Just today, I got notification of a new paper by Walter Neves and colleagues, in which they suggest that Australopithecus sediba and Homo naledi are actually South African representatives of Homo habilis. Some people might scoff at this--after all, the Dinaledi fossils are only 236,000--335,000 years old, while the latest-known H. habilis is around 1.6 million. But a young date for some fossils doesn't bar them from membership in a species with much older fossil representatives. Identity is tested with morphological evidence, not geological age." ("Arguing about species: Is it evidence, or ego?" 3 Aug. 2017)


Ego-driven interpretation is a factor in the supposed conflict between Scripture and Science. The age of the earth debate is an example. Humility is part of the solution. We also need to read Scripture as a scientist would; reading with greater attention to details, and identifying biblical data.

Both Scripture and the natural world speak of the Creator and the Logos in whom there is no falsehood. Our God urges us to seek wisdom and delights to help us find the truth.

Small differences in the Gospel narratives, for example, do not disprove them. These simply mean that eye witnesses noted different details. Were all the details of the narratives identical we would have evidence of collusion. Such testimony is denied in a court of law.

Contradiction between the assertions of Scripture and the assertions of Science are another matter. The age of the earth cannot be billions of years old and 10,000 years old. Which is it? Contradictions arise when we are faced with inaccurate interpretations and/or inadequate information. At its best, science investigates all avenues of information, including claims of the Bible. This approach taken by biblical archaeologists has led to many important discoveries in the Holy Land.

This asserts that Havilah in the land of Cush is rich in gold, bdellium and onyx. A search of the geologic record of the Upper Nile reveals that this region is indeed rich in gold. Studies in botany indicate that Bdellium is a resin that comes from trees that grow in the Upper Nile, especially in Ethiopia (ancient Nubia). The archaeological record reveals that the ancient Egyptians were the first to produce great artifacts of onyx. Onyx was used as early as the Second Dynasty to make bowls, jewelry and figurines. It was mined south of Egypt and also in areas of Eurasia that were under Egyptian control.

Bible interpretation at its best asks whether there is empirical evidence for the Scriptural assertion. Good Bible study investigates deeply to see whether the claims of Scripture are true. This praise worthy quality of the Bereans is the same quality that should be found in every serious Christian disciple.

After 40 years of studying the Bible through the scientific lens, I am convinced that there is a perfect alignment between the assertions and data of the Bible and the findings of the best science.

It comes down to humility, due diligence, and empirically justified interpretations. This is a task for all who wish to be apologists for the Christian faith. It is a task that makes outreach to the world more fruitful, and conversation with young people more relevant.

Wrong interpretations and misrepresentations of the Bible lead to bad theology. Ignoring pertinent Biblical data in developing scientific hypotheses leads to bad science. Humility, diligence, and disciplined reading are needed if we are to get at the truth. Truth is not as self-evident as we imagine. It often expresses itself in quirky and paradoxical ways (as G.K. Chesterton brilliantly reminds us). The search for truth requires looking at the big picture as well as the smallest, seemingly insignificant details.

Email ThisBlogThis!Share to TwitterShare to FacebookShare to Pinterest
Labels: science and belief