There is more and more evidence that the territory where ancient Israel, Aram, and Phoenicia met was an ethnic melting pot.

The wise woman of Abel Beth Maacah saved her town from destruction when she surrendered the head of Sheba to David’s general (2 Sam. 20:17-22). Sheba contested David's claim to the throne. Indeed, the royal House of Sheba was very old and had roots in Africa and Southern Arabia. Sheba may have sought refuge with Afro-Arabian kinsmen living in Abel Beth Maacah.

Tel Abel Beth Maacah is a large archaeological site consisting of a mound with a small upper northern section and a large lower southern section. These sections are connected by a saddle. Excavations at Tel Abel Beth Maacah have been conducted since 2012 under the direction of Robert Mullins (Azusa Pacific University) and Nava Panitz-Cohen (Hebrew University of Jerusalem). Ruhama Bonfil was the surveyor.

A Hebrew inscription on a jar unearthed at Abel Beth Macaah may resolve a long-running dispute about the extent of Israelite territory in the 9th-century B.C.E. Written in Hebrew, the inscription reads Ibnayo: “belonging to Benaiyo.” Ibn and ben mean "son" so this should be read as "son of Aiyo." Aiyo is an African name with the variant spelling Ayo.

Also found at Able Beth Maccah was a 13th century ceramic jug with a cache of 12 silver coins. The coins were fused together by corrosion. However, Miriam Lavi used a diluted acid solution to separate the silver pieces. The hoard included earrings and an ingot in the shape of the continent of Africa (shown below). 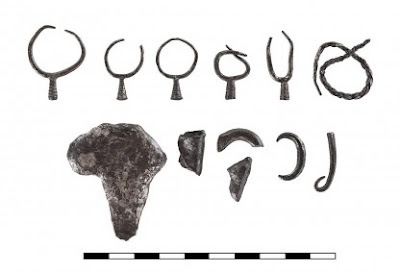