Nebo was a Horite Hebrew Shrine 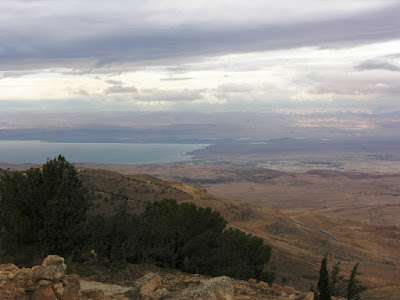 The name YHWH is found on the Mesha Stele (Moabite Stone) inscribed around 860 B.C. in the name of Mesha, the King of Moab. In a military action, Mesha claims to have taken Nebo and carried off the "vessels of YHWH." This indicates that there was a temple or shrine on Mount Nebo.

Nebo is an elevated ridge in the Abarim range in modern Jordan. This land was once part of ancient Edom. Nebo was a Hebrew high place long before the time of Moses. Evidence of human occupation is found in the Bronze Age cave burials in the Nebo hills, and the 18,000-year axes and arrowheads found in the area.

Nebo is also spelled Nevo, and there appears to be a connection to Abraham and Sarah. When the patriarch Terah died, Abraham's older brother Nahor ruled over Terah's holdings in Mesopotamia. Abraham became a sent-away son. Sent-away sons often went to live with maternal uncles, as did Jacob. This is called avunculocal residence. It appears that Abraham's calling to leave his home involved a long-standing tradition.

According to the Talmud, Sarah was the daughter of a ruler named Kar-nevo. Yet, according to Genesis 20:12, Abraham and Sarah had the same father, but different mothers. Sarah’s father was Terah, not Karnevo. However, s often happens in the Bible rulers of places and place names are interchanged and become synonymous. Kar-nevo/nebo is a place name. Kar refers to an elevated site where burnt offerings were made, and Kar-Nevo refers to Mount Nebo. It appears that Abraham and Sarah had an uncle there. Likely, he was a Horite Hebrew priest. Clearly, the name Yahweh was known at that shrine, as it was known among older shrines along the Nile.

This also explains why Moses, a descendant of Seir the Horite Hebrew, spent the last days of his life. Mount Nebo was a Horite Hebrew sacred place, as was Edom, where Aaron was buried.