Veneration of the Bear

Artifacts related to bears have been found globally at the middle and high latitudes. Cave bears lived in the Pyrenees, Alps, and Carpathians. Many bear skeletal remains have been found in caves in these mountain ranges. At that time, (115,000 to 11,700 years ago) humans and bears would have competed for space in rock shelters.

The cave known as "Drachenloch" (Dragon's Lair) was excavated in between 1917 and 1923 by Dr. Emil Bächler. The remains of more than 30,000 cave bears were found. Some accumulations of bear bones were found behind walls. These caches included the long leg bones and more or less complete skulls.

Bächler found what he described as stone chests full of bear bones. One of these was about three feet high and covered with a large limestone slab. Inside it were a group of cave bear skulls, all aligned in the same direction. This is one of the more famous discoveries that suggest that Neanderthal humans venerated the bear. Bear veneration is called "arctolatry."

Analysis of prehistoric bone assemblages of bears, mammoths, reindeer, horses, and bulls does suggest that archaic humans were consciously ritualistic in their veneration of the animals with which they co-existed. This is further supported by the intentional red ocher staining of some bear bones. Upper Paleolithic deposits of bear bones recovered from Belgian caves reveal traces of red ocher. Red ocher was used for human burials for at least 100,000 years.

This leads to the suggestion that archaic humans regarded bears to be anatomically like humans and applied red ocher to their bones at burial.

Dr. Barry Sanders reports in his anthology Bears, that around 40,000 years ago a "goddess" appeared wearing a bear mask. Between 9000 and 5000 years ago various Y-DNA R1b populations made clay statues of a goddess nursing a bear cub.

Until about 1945, the Ainu elders of Japan raised a bear cub as a family member until the day it was ritually sacrificed. This photo, taken around 1930, shows an Ainu elder and his wife with their bear and a Japanese visitor. The Ainu elder wears the distinctive knobbed headdress. It is same as those worn by "Miqmac" Ainu elders of Canada and by the ancient Annu chiefs of the ancient Upper Nile. 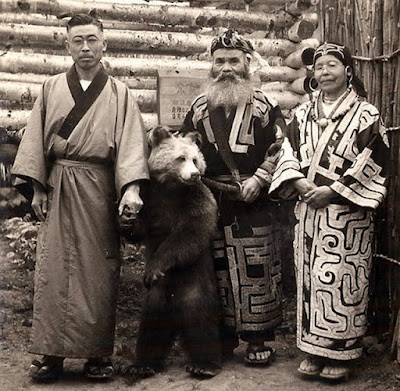 The Miqmac Ainu are in mtDNA haplogroup X. Approximately, 40% of the Druze population of Galilee is in this group. The genetic sequences of Haplogroup X diverged from Haplogroup N which originated in the region of the Lower Nile.
The Miqmac of eastern Canada say that they came through the British Isles to Finland and Greenland and on to Labrador and the eastern seaboard of Canada.

The antiquity of bear imagery and veneration invites a deeper investigation into the cultural links between the groups known to venerate the bear: the Ainu of Japan, the Micmaq of Eastern Canada, and early populations of Germany, Spain, and Gaul.
Stone Age Bear Carvings 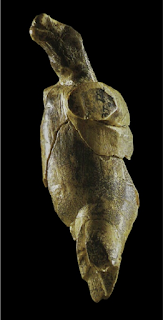 The bear shown above was reconstructed from 11 pieces of ivory. It was found at Geißenklösterle cave, Blaubeuren, and is dated to c. 45,000 years. The original carving is in the Württemberg Landesmuseum, Stuttgart.

Bears and the Bible 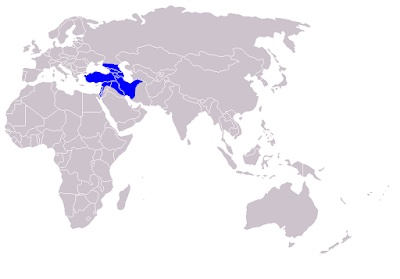 In the book of Job we read of the Bear constellation as God's creation. "Who made the Bear and Orion, the Pleiades and the chambers of the south..." (Job 9:9) 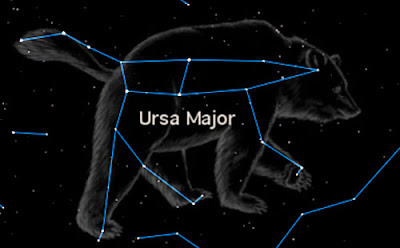 In the Bible she-bears are portrayed as especially dangerous when with their cubs. "Let a man meet a she-bear robbed of her cubs rather than a fool in his folly." (Proverbs 17:12)

Bears appear in the Bible as ferocious beasts who maul children. The savage attack of a bear is thought to symbolize divine judgement. This may be the message of a disturbing story from II Kings:

“From there Elisha went up to Bethel. As he was walking up the path, some small boys came out of the city and harassed him, chanting, ‘Go up, baldy! Go up, baldy!’ He turned around, looked at them, and cursed them in the name of the Lord. Then two female bears came out of the woods and mauled 42 of the children.” II Kings. 2:23,24 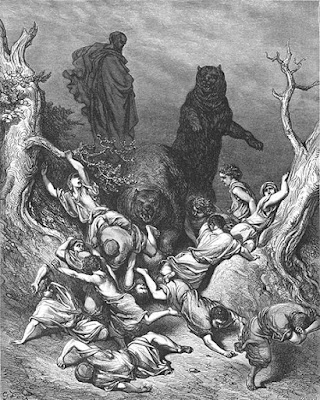 The point seems to be that Elisha was a great prophet and those who malign prophets are under divine judgement. This narrative would have served the dual purpose of warning children about bears and instilling in them respect for the prophets. But there more to this account. The bear is an ancient symbol of shamanic authority, and in II Kings the appearance of two bears with Elisha points to his spiritual authority. Similarly, the appearance of Elijah and Moses with Jesus at the Transfiguration speaks of His authority as Messiah.

Related reading: Using Totems to Trace Ancestry and Marriage Ties; "The Cult of the Bear Cave" by Phillip G. Chase; "Fossil Bear Bones in the Belgian Upper Paleolithic: The Possibility of a Proto Bear-Ceremonialism" by Mietje Germonpré and Riku Hämäläinen, Arctic Anthropology, Vol. 44, No. 2 (2007), pp. 1-30 (30 pages); Red Ochre People; The Sites of Geißenklösterle, Hohle Fels, and Middle Paleolithic sites in the Swabian Alb near the city of Ulm

Email ThisBlogThis!Share to TwitterShare to FacebookShare to Pinterest
Labels: Bears