The Aaronic Blessing Speaks of the Gospel

Jeff understands how the Hebrew language works and the concrete nature of Hebrew vocabulary. That is why he connects the abstract ideas in the Aaronic Blessing to the concrete images that would likely stand behind them. Here is Benner's understanding of the Priestly blessing.


A Hebraic interpretation of the Aaronic Blessing

With the Hebraic understanding of each of these Hebrew words, we can better understand the true meaning of the Aaronic blessing as it was understood by the Ancient Hebrews.

YHWH will kneel before you presenting gifts and will guard you with a hedge of protection.

YHWH will illuminate the wholeness of his being toward you bringing order and he will give you comfort and sustenance.

YHWH will lift up his wholeness of being and look upon you and he will set in place all you need to be whole and complete.

When we probe this translation we discover the Gospel.

Does God kneel before us? Yes! Jesus knelt to wash the feet of His disciples.

Jesus knew that the Father had put all things under his power, and that he had come from God and was returning to God; 4 so he got up from the meal, took off his outer clothing, and wrapped a towel around his waist. 5 After that, he poured water into a basin and began to wash his disciples’ feet, drying them with the towel that was wrapped around him.

Does God shine forth with the wholeness of His being? Yes. Jesus tells us that those who see Him, see the Father.

If you had known Me, you would know My Father as well. From now on you do know Him and have seen Him.” Philip said to Him, “Lord, show us the Father, and that will be enough for us.” Jesus replied, “Philip, I have been with you all this time, and still you do not know Me? Anyone who has seen Me has seen the Father.

Does God provide all we need to be whole? Yes. Consider Psalm 38:9 -"O Lord, my every desire is before You; my groaning is not hidden from You." Matthew 6:8 says, "your Father knows what you need before you ask him."

Jeff Benner's translation is helpful because it connects YWHW to the Gospel of Jesus Messiah, the Son of God. His explanations are wonderful also. However, I have reservations about Jeff's idea in this paragraph:

The Hebrews were a nomadic people raising livestock. It would not be uncommon for a shepherd to be out with his flock, away from the camp, over the night. In order to protect the flock, the shepherd would construct a corral of thorn bushes. The shepherd would then guard over the flock and the corral would be a hedge of protection around them. The Hebrew word for a thorn is שמיר (shamiyr, Strong's #8068) and derived from the verb שמר(shamar, Strong's #8104), which literally means to guard and protect and is the word used in the Aaronic blessing.


I appreciate what Jeff wrote about the thorn enclosures, and I am sure that these were used for temporary stays. However, strictly speaking, the Hebrew were not nomadic. They were a caste of ruler-priests who kept herds for the sacrifice. This means that some of them, usually the younger men, worked as shepherds. It was their practice to move livestock from one grazing ground to another in a seasonal cycle, typically to lowlands in winter and highlands in summer. This is called transhumance. It does not preclude control of a territory as Abraham and other Horite Hebrew clearly did.

They had their own grazing areas in which they had constructed bee-hive shape stone cotes like the one shown here. 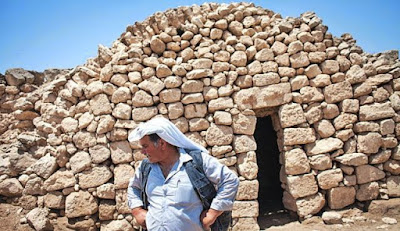 2 Samuel 7:8 describes the sheep cote as a dwelling place (naveh). Naveh also refers to a temple or a local shrine, so it is evident that the image here is of a more permanent structure than an enclosure of thorns bushes.

Now we have a better understanding of Jesus' words in John 10:9-15.


Jesus said, "I am the door; if anyone enters through Me, he will be saved, and will go in and out and find pasture. The thief comes only to steal and kill and destroy; I came that they may have life, and have it abundantly. I am the good shepherd; the good shepherd lays down His life for the sheep. He who is a hired hand, and not a shepherd, who is not the owner of the sheep, sees the wolf coming, and leaves the sheep and flees, and the wolf snatches them and scatters them. The man runs away because he is a hired hand and cares nothing for the sheep. I am the good shepherd; I know my sheep and my sheep know me-- even as the Father knows Me and I know the Father; and I lay down My life for the sheep."

Note where the shepherd is standing in this image of a stone sheep cote or "tholos" in Abruzzo, Italy. 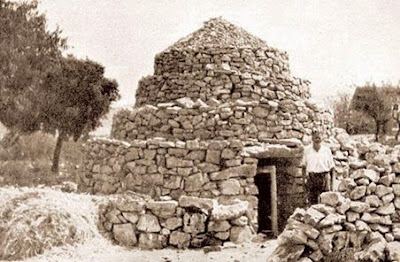 The man is standing is where the shepherd often sleeps. He becomes the door that guards the way to the sheep. YHWH guards us as one who stands in the doorway. Jesus claims to embody that reality.