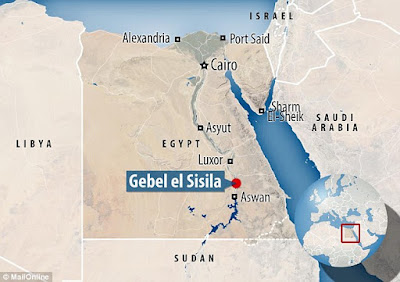 Gebel el Silsila is located on the Nile between Luxor and Aswan. Here archaeologists from Sweden's Lund University, working with Egyptian archaeologists, found a dozen new burial sites dating back 3,500 years. In 2015, they also discovered the remains of an ancient temple there. Gebel el Silsila means "Chain of Mountains" in Arabic. The ancient name of the Nile settlement was Kheny.

The team found 12 new tombs from the period of the Eighteenth Dynasty. The burial sites contained, painted pottery, scarabs, jewelry, and animal remains buried separately from human remains. The remains of a crocodile were found in one grave.  The crocodile was called "olom" by the ancient Nubians. and some Nilotic rulers took this creature as their totem.

The tombs at Gebel el Silsila range from large family crypts to smaller tombs that, in some cases are shallow graves covered with rubble from the nearby quarry.

In the tomb of a child wrapped in linen (ST63) the expedition found 3 scarabs, one with the royal name of Thutmosis II (Aa-Kheper-n-Ra).

This expedition found a seal ring bearing the cartouche of Pharaoh Thutmosis III (Men-Kheper-Ra) and a scarab with his name. Thutmosis III was the sixth Pharaoh of the Eighteenth Dynasty. He and reigned for 22 years with Hatshepsut, his stepmother and aunt. He reigned for almost 54 years (BC 1479-1425) and extended the Egyptian empire empire Egypt from the Fourth Cataract in Nubia to Niya in North Syria.

Additionally, six statues and relief scenes were found in shrines 30-31 from the reigns of Hatshepsut and Thutmosis III.