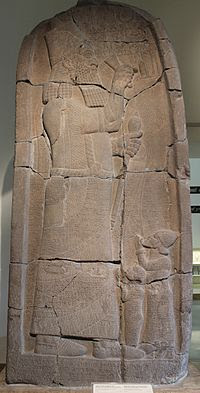 Victory Stele of Asarhaddon in the Pergamon Museum in Berlín.

The kings of the Ancient Near East often formed treaties. The vassal treaty is a feature of Neo-Assyrian and Neo-Babylonian imperialism. It is also called the suzerainty treaty.

Scholars have learned much about ancient treaties by studying ancient tablets such as the the Mari Tablets (Mesopotamia), The Pact of Esarhaddon (Assyrian), the Amarna Texts (Egyptian), and the Egyptian-Hittite Peace Treaty. Some of these pacts are not between equals. That is the ase with the covenant made by God in Genesis 15. It is the LORD himself who passes between the animal halves while Abraham beholds this miraculous vision. The LORD reminds Abraham of all his faithfulness to him: "I brought you here from Ur. I am your Shield. I am your Reward."

The Pact of Esarhaddon is an example. This was to establish Ashurbanipal, Esarhaddon's son, as successor to the throne. Esharhaddon swore his vassals to a covenant that, if broken, called down sixty-two curses upon them and their descendants. Despite the threat, the sons of the vassals who pledged allegiance rebelled against Sinharishkin, grandson of Ashurbanipal and sacked his capital at Nimrud. They smashed the clay tablets on which copies of the pact had been inscribed. In 1955, more than 350 fragments of the treaty tablets were found in the buried throne room of Nimrud. These were pieced together and transcribed by Donald J. Wiseman.

Other ancient treaties were between equals, that is, two high kings. These were to the mutual benefit of both parties.

Here is a partial list of the matters addressed in these ancient treaties:


The most common treaties were between a high king and a lesser ruler. The high king is called the suzerain and the lesser king is called "prince," "vassal," or "vizier." In Genesis 23:5, the Hittites of Canaan refer to Abraham as a "great prince among us." (The Hebrew: ádoniy n'siy élohiym probably refers to a mighty ruler-priest.)

If the treaty is between a royal father and his male heir, the royal heir is called "son." This is referred to in Genesis as the "birthright." Isaac was the royal heir to Abraham's holdings. Before Abraham died, he had his servant swear an oath that Isaac would marry Rebecca, a patrilineal cousin. To secure Isaac in his position as ruler, Abraham gave gifts to his other sons and sent them away from Isaac (Genesis 25:6).

The lesser ruler had obligations to serve the greater king. He had the responsibility to enforce the high king's laws and he was the representative of the people before the suzerain. On ancient murals the lesser ruler is often shown bowing before the high king, as in the Babylonian image below. Sometimes the suzerain and the vassal are shown holding clay tablets upon which the treaty was inscribed.


In this image the high king is lifting a bowl to the Creator who is symbolized by the Sun. The bowl would have contained oil or wine and is called an "oblation." A vassal bows before him. Facing the suzerain, and standing, is a royal priest. He is offering sheaves of wheat to the Creator. Only one person in the Old Testament stood in the role of both Suzerain and Priest, and that person, Melchizedek, points to Jesus Christ (Hebrews 7:1-21).

In many ancient images the high king was shown with the Sun symbol on his head or directly above his head. This signified that he had been divinely appointed to rule. This terracotta figurine from the Nok civilization is an example. It dates to around 2000 BC, the time of Abraham. 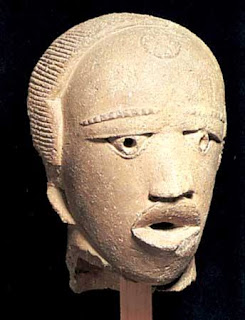 The treaty clarified the duties and obligations of the vassal. One stipulation was that the vassal place his copy of the treaty in his shrine and he was to read it on certain occasions to remember his duties. 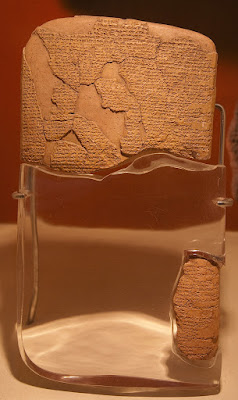 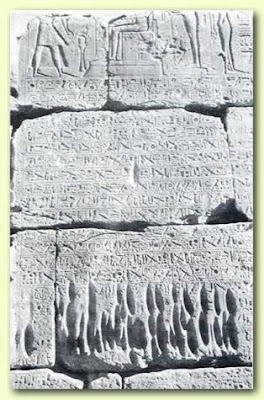 
After the Treaty of Kadesh took effect, greetings were exchanged between the two courts, particularly between the two queens, Nefertari of Egypt and the Hittite queen Budu-Khebi ("Veiled High Queen"). Nefertari wrote:


Typically, the treaty ratification rite involved cutting the bodies of animals in halves and placing them in two rows with enough space between for the two parties to walk side by side between the sacrificed animals. As they walked between the pieces, they vowed to each other, "May what has happened to these animals, happen to me if I break this covenant with you."

In the case of treaties made to honor territorial boundaries, there was an ancient custom of raising a heap of stones. This was done by Laban and Jacob as a 'witness' to the oath they swore (Gen. 31:45).

Related reading: "Suzerain Treaties and The Covenant Documents of the Bible" by Dr. Meredith Kline, Why Hebrew Rulers Denied Marriage to Royal Women; The Social Structure of the Biblical Hebrew; Sent-Away Sons; Rulers of the Ancient World; The Structure of Vassal Treaties