In this detail taken from Treasures of Egypt and Nubia, we see a reproduction of a Ippolito Rosellini painting done during the 1825 Franco-Italian expedition to Egypt. Red and black Nubian captives are roped together and the rope is pulled by the Pharaoh whose back is shown at the bottom right. 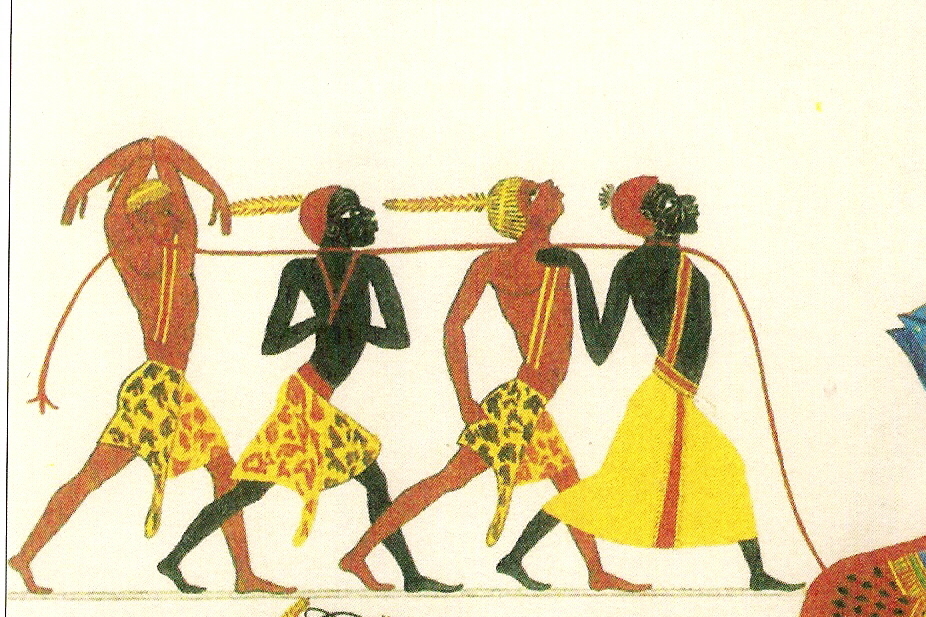 It is evident from another image that both red and black are bound. 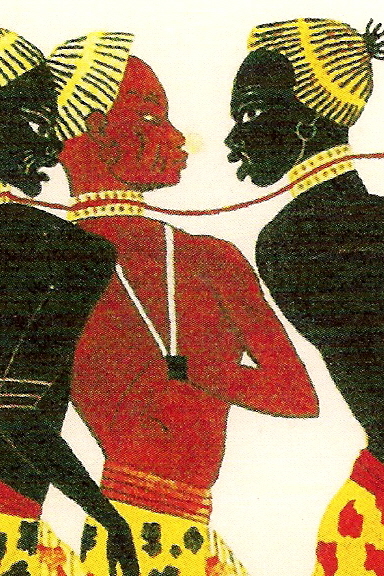 Incense burners found at Addi Akaweh in the Tigray region of Ethiopia bear an inscription that says the region was ruled by three kings jointly ca. 2800 years ago. They ruled with their queens over a population of black and red citizens. One commentators states that the Shebans were red (like the Ainu) and the Hebrews were black. This has not be verified. It seems more likely that Nubian parents often had children of different color. This happens even today and sometimes with twins.

Genesis indicates that Esau was red. Was Jacob black?

The Queen of Sheba probably did not rule over the same territory as her very powerful ancestors named in Genesis. By the time of Solomon came to power Sheba's territory was diminished. David likely took control of some of those lands in the south. Remember, Sheba claimed to have a legitimate right to the throne in Jerusalem (and he probably did have a legitimate claim). He lost his life when he took refuge in the city of Abel Beth Maacah. He was beheaded there (2 Samuel 20:1-22).

Beersheba means the Well of Sheba. It was a principal settlement and very old center for metal work. Jews will deny this since Abraham lived there, as did Isaac. They interpret Beersheba to mean the well of seven.

Bilquis is mentioned in Yoruba lore. There are some problems with the alignments of the stories, however. A huge barrier wall has been discovered in Nigeria which the locals say is associated with Queen Bilquis. This seems to come from later Arabic sources though. I believe, however, the local people are correct in their association of the wall with the Shebans because they were kin to the Jebusites and the Ijebu still live in that place. Gen. 10 indicates that both the Shebans and teh Jebusties were Kushites. Jerusalem was originally a Jebusite or Ijebu shrine city. The Sheban (also spelled Sebans; Sabaeans) are clan of Joktan, son of Eber (Ebry) om Genesis 10:27-28). In Gen. 10:6-7 we find their ancestors are called Seba and Sheba and they are identified as Kushites. According to Vedic tradition, the Kushites ruled the ancient world for 7000 years.

Jesus said, "The Queen of the South will rise up at the judgment with the men of this generation and condemn them, for she came from the ends of the earth to hear the wisdom of Solomon, and behold, something greater than Solomon is here." (Matt. 12: 42; Luke 11: 31)