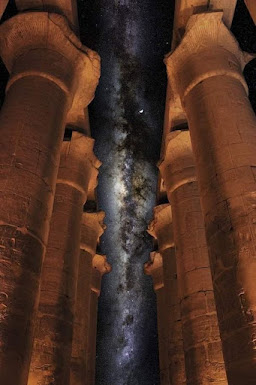 Hypostyle Hall of the main temple of Karnak aligned to the Milky Way
Alice C. Linsley


Using the kinship data presented in the king lists of Genesis 4, 5, 10, 11, 25 and 36, the pattern of intermarriage among Abraham's ruler-priest ancestors has been identified. (See The Marriage and Ascendancy Pattern of Abraham's People.)

The early Hebrew rulers had two wives who lived in separate settlements on a north-south axis. Abraham's half-sister wife Sarah resided in Hebron and Abraham's cousin wife lived to the south in Beersheba. This relates to the cosmology of the Horite and Sethite Hebrew who perceived of the Sun as the emblem of the High God. He rides the sun as his celestial boat or chariot, making his daily circuit from east to west. From the perspective of the person on earth, high noon marked the sacred center of the High God's journey. It is the time of no shadows to which James refers: "Every good and perfect gift descends from above, from The Father of lights with whom there is no change nor a shadow of variation." (James1:17)
Cosmology is the study of the origin and structure of the universe, its parts, elements, and laws. Among biblical populations, the arrangement of a home, a village, and a royal complex expressed the community's cosmological understanding. For example, the place of priority was at the sacred center. In the home, this was the hearth. In the palace, this was where the ruler was seated on his throne. In the temple, this was the inner sanctum. Temples were built with east-facing entrances because the Sun was the symbol of the Rising God whose light filled the temple each morning.The pillars of the temples were perceived to connect Heaven and Earth. The temporal sacred center was high noon.The spatial sacred center was the mountain top.
Comparing cosmologies can help to clarify the worldviews of the biblical populations, and can serve as a way to trace points of origin. This also relates to the celestial totems claimed by various Hebrew clans.
Related reading: Hebrew Rulers With Two Wives; Cosmologies of the Ancient Near East; The Wives' Settlements Marked the Territory's Borders
Posted by Alice C. Linsley at 1:19 PM

Email ThisBlogThis!Share to TwitterShare to FacebookShare to Pinterest
Labels: cosmology