The Pillars of Solomon's Temple

Many features of Solomon's Temple as it is described in the Bible reflect very ancient temple building practices among his ruler-priest ancestors. Temples were constructed by rulers and reflected a tradition of "royal" architecture. Shrine rooms held altars, libation vessels, and standing stones. The standing stones may have been dedicated to righteous ancestors.

Massive pillars are another feature of the royal architecture. The temple at On was constructed with many pillars or columns. The people who lived there called the shrine city iunu, meaning "place of pillars" or "pillared place of the Annu." The Annu were the early builders of Biblical On.

Joseph married the daughter of the priest of On (Genesis 41:50). In Jerome's Latin Bible On is called Heliopoleos which in the Greek language is Heliopolis, meaning "City of the Sun."

Solomon's temple in Jerusalem was built under the direction of King Hiram of Tyre (I Kings 9:11, II Chronicles 2:3). King Hiram and David, and Solomon were kinsmen. They had some ancestors in common. as analysis of the royal names indicates. King Hiram sent skilled artisans to help David build a palace in Jerusalem. Probably some of the same builders helped with the construction of Solomon's Temple.

The construction of temples was mainly under the supervision of royal priests. In the ancient world they were known as 'Apiru, Ha'piru, or Ha'biru. The English variant of Ha'biru is the word Hebrew. 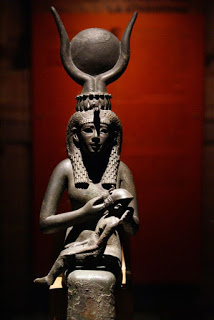 Many of the Habiru were devotees of the Creator and his son Horus. Variants of the name Horus are found among many Hebrew priests and rulers. These include Hiram, Horam, Harum, Hur, Hor and Harun (Aaron). According to Midrash, Hur was Moses’ brother-in-law. Hur’s grandson was one of the builders of the Tabernacle. I Chronicles 4:4 lists Hur as the "father" of Bethlehem, also called "the city of David."

These ruler-priests are therefore known as "Horites" and one of their territories was the land of Edom, where Abraham settled. The Horite rulers of Edom are listed in Genesis 36.
Solomon's temple was arranged on an east-west axis as was typical of most Horite temples. The Horite Hebrew regarded the Sun as the symbol of the Creator. That is why the shrine city of On is also known as Heliopolis, meaning "City of the Sun." In the Horite Hebrew religion it was believed that a virgin from among their people would conceive the "Son" or the "Seed" of God (Genesis 3:15.) This would happen when the young woman was "overshadowed" by the Sun. The archetype of the Virgin Mary among the Horite Hebrew was Hathor, the mother of Horus Enki in Akkadian). She is shown in ancient images with the Sun over her head as a sign of divine appointment by overshadowing (cf. Luke 1).

A shrine dedicated to Hathor was discovered at the southwestern edge of Mt. Timna in Israel by Professor Beno Rothenberg of Hebrew University. Hathor was the patroness of metal workers.
Another feature of Solomon's temple that reflected ancient Horite Hebrew practice was the naming of pillars in memory of famous ancestors, especially ancestors who were known for living righteous lives. The entrance to Solomon's temple was flanked by twin pillars dedicated to his righteous ancestors Jochin and Boaz. Boaz married Ruth who gave birth of Obed, the father of Jesse, the father of David.

David and Solomon were of the ruler-priest lines that can be traced from before the time of Abraham to Joseph and Mary, the mother of Jesus. The Angel Gabriel told Mary that she would conceive by being overshadowed. When Mary asked the Angel, "How shall this be, seeing I know not a man?" Gabriel explained, "The Holy Ghost shall come upon thee, and the power of the Highest shall overshadow thee: therefore the Holy One which shall be born of thee shall be called the "Son of God." (Luke 1:34, 35)

Mary was the daughter of the shepherd-priest Joachim. Variant spellings of Joachim include Jachin, Jochin, and Joktan. Abraham's first born son was named Joktan.

Related reading: Sacred Mountains and Pillars;  The Urheimat of the Canaanite Y; Abraham's Habiru Ancestors; Edom and the Horites