Ashkenazi Jews are a greater mix of genetic ancestries than previously thought. The majority of males studied have the R1a-Y2619 lineage with an ancestral origin in the Middle East around 2000 years before the present. R1a is the most prevalent Y-chromosome haplogroup in Eastern Europe.

However, the Ashkenazi show evidence of gene flow from Slav, Scythian, Hunnic-Bulgar, Iranian, Alan and Turkic peoples. These formed the Khazar empire which at its height stretched from Kiev to the Aral Sea. Clearly, Jewish racial purity was not sustained during the dispersion of the Jews before the time of Jesus Christ.

The Khazar empire fell in the 13th century AD, having been weakened by the Plague and Mongol invasions. Many Jewish refugees fled into Eastern Europe. Today these are known as Ashkenazi Jews. The future generations of many of these Jews was one of suffering under the Nazi regime. Their story is told in Elie Wiesel's Nobel Prize winning book Night.

A study published online in the journal Genome Biology and Evolution by Dr. Eran Elhaik, a geneticist at the Johns Hopkins School of Public Health, supports the Khazar Hypothesis. However, the Khazar Hypothesis has been dismissed by some geneticists and continues to be disputed.
The "Rhineland Hypothesis" is another view. According to this theory, descendants of the Canaanite Jews left Palestine for Europe following the Muslim conquest of Palestine in the 7th century AD. In the beginning of the 15th century, approximately 50,000 left Germany for eastern Europe. By the 20th century their numbers were estimated at about 8 million.

Under the Rhineland Hypothesis, European Jews would be very similar to each other and would have a predominant Middle Eastern ancestry. However, this is not the case.
'The missing link of Jewish European ancestry: contrasting the Rhineland and the Khazarian Hypotheses' examined a comprehensive dataset of 1,287 unrelated individuals of 8 Jewish and 74 non-Jewish populations genotyped over 531,315 autosomal single nucleotide polymorphisms (SNPs).

This was data published by Doron Behar and colleagues in 2010, which Elhaik used to calculate seven measures of ancestry, relatedness, admixture, allele sharing distances, geographical origins, and migration patterns. These identified the Caucasus-Near Eastern and European ancestral signatures in the European Jews' genome along with a smaller, but substantial Middle Eastern genome. The results were consistent in depicting a Caucasus ancestry for all European Jews. The analysis showed a tight genetic relationship between European Jews and Caucasus populations and pinpointed the biogeographic origin of the European Jews to the south of Khazaria, 560 kilometers from Samandar, Khazaria's capital.

Dr. Elhaik writes, "The most parsimonious explanation for our findings is that Eastern European Jews are of Judeo-Khazarian ancestry forged over many centuries in the Caucasus. Jewish presence in the Caucasus and later Khazaria was recorded as early as the late centuries BCE and reinforced due to the increase in trade along the Silk Road, the decline of Judah (1st-7th centuries), and the rise of Christianity and Islam. Greco-Roman and Mesopotamian Jews gravitating toward Khazaria were also common in the early centuries and their migrations were intensified following the Khazars' conversion to Judaism… The religious conversion of the Khazars encompassed most of the Empire's citizens and subordinate tribes and lasted for the next 400 years until the invasion of the Mongols. At the final collapse of their empire in the 13th century, many of the Judeo-Khazars fled to Eastern Europe and later migrated to Central Europe and admixed with the neighbouring populations."

Elhaik's study showed a major difference among Caucasus populations explained by the early presence of Judeans in the Southern and Central Caucasus. When we explore the genetic lineages of the Judeans we discover a Nilotic-Kushite ancestry.

The Ashkenazi have roots much older than either of these hypotheses grants. R1a and R1b share common ancestry before 25,000 years ago that can be traced back to Africa as shown on this map. 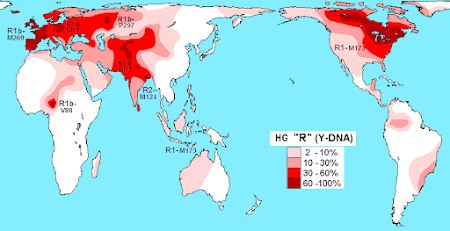 The ancestors of the Ashkenazi were likely merchants who settled in the shrine cities that were located on major water systems. In the ancient world merchants were called GR. There appears to be a relationship between the words gir, gar and ghar or khar. Bulghar was spoken by the Asiatic Ghars (Khars) from which the territory of Bulgaria takes its name. The Bulghar language was spoken in the Onogur tribal confederation into which Genghis Kahn married. Ono pertains to On or ancient Heliopolis, the Horite shrine city to which the great pyramids of Giza, Saqqara, and Abusir are aligned.

The word ghar means house, as in royal palace or royal city and is a cognate to word khar. In ancient Egyptian, khar refers to a measure of fuel used to offer sacrifice in the temple. The temple was in the precinct of the royal palace. Among the Guruntum-Gar, a West Chadic people, khar appears as har in last names. An example is Andrew Haruna. Haruna is the Chadic name for Aaron, suggesting a very ancient connection between the priesthood of Israel and their Kushite ruler-priest ancestors.

The Horites have been identified with references to Khar, a unit of measurement used in trade in the Egyptian inscriptions. The word khar is related to gur. In Akkadian gurguri means metalworkers or copper smiths. In Oromo gurguru means to sell (gurgurtaa = sale, gurguraa = seller). In Somali gur- means to collect something and gurgure means "one who collects." The Gurgure clan of the Dir refers to traders who collect wares and resale them. Among the Dir guri means stick, rod or firearm.

The Persian and Urdu word saudagar means trader. This contains the gr root in connection with Arabia. Horite traders dispersed across the ancient world. The association of the roots Ghar/GR (traders) and Khar/HR (Horites) is evident in India in place names such as Gurgaon Haryana.

The Gir-gam tells the story of Abraham's ancestors Cain, Seth, and Noah. All were merchant rulers who controlled the water ways of their territories.
The word "Horite" takes many forms including Hur, Horonaim, Horoni, and Hori. Hori was the son of Lotan son of Seir. Seir the Horite is mentioned in Genesis 36. A linguistic connection to the Horites is retained in the name Horowitz (Hurwitz or Gurvich), a surname commonly found among the Ashkenazi.
The oldest texts known to come from the Horite and Sethite Hebrew date to 4200 years ago, long before the Ashkenazi and the Judeans appeared on the stage of history.


Related reading: Who Were the Horites?; Horite Mounds, Noah's Sons and their Descendants; The Kushan-Kushite Connection; Were Abraham's People Refugees or Rulers?; Sub-Saharan DNA of Modern Jews; The Kushite Marriage Pattern Drove Their Expansion