Is Biblical Anthropology an Oxymoron?

The Bible contains 66 canonical books. These books include sacred music, history, genealogy, legend and myth; all of particular interest to cultural anthropologists. So why the prejudice against biblical anthropology?

Some anthropologists regard the words Bible and Anthropology as an oxymoron (from Greek ὀξύμωρον, "sharply dull"). Why would a volume of poetry, prayers, oracles, sacred centers and curses, etc. stand as a contradiction to the discipline of Anthropology? Cultural anthropologists investigate such things when it comes to shamans, native healers and griots. Why not also investigate the sacred world of Afro-Asiatic ruler-priests and their Arab and Jewish descendents?

Here is what some people have to say on this topic. I'd be interested in readers' opinions on this question. Please leave a comment.

Michael F: Science and beliefs do not mix.

Alice L: Science begins in belief. One must believe something to even begin to think scientifically.

Gioiello: Bible and theology are not the enemy of the biological evolution; they are superfluous.

Alice L: That's the sort of caustic remark one reads at science sites "where graduate students, researchers, doctors and the 'skeptical community' go not to interpret data or review experiments but to chip off one-liners, promote their books and jeer at smokers, fat people and churchgoers? And can anyone who still enjoys this class-inflected bloodsport tell me why it has to happen under the banner of science? " -- Virginia Heffernan, The NYT Magazine

Susan B: There is a chasm between science and religion that needs to be bridged before our understanding of the human condition can be fully formed.

Alice L: I agree, and biblical anthropology, biblical archaeology, linguistics, and migration studies are the disciplines that must close the gap. Biblical anthropology, like biblical archaeology, uses the Bible as a resource in advancing knowledge of the ancient Near Eastern and ancient African peoples and cultures. Both seek data and material evidence, only of a different kind. The two disciplines work hand-in-hand.

Elsbeth T: An anthropologist is always seeking data. Perhaps this is the key to finding a common ground between the theologian and the anthropologist. Both are looking for evidence (data) to confirm truths (conclusions). I think that using a scientific methodology can be beneficial to all sides of the conversation.

Susan B: If the study of biblical humanity is to be undertaken then science and religion are going to have to "mix it up". I see nothing wrong with stating our personal beliefs. They are conclusions reached through research and evidence no different than an atheist declaring the fact that there is no god. Science does not have the ability to definitively prove this theory one way or the other and does not take a position. That doesn't stop popular scientists and other vocal critics from suggesting we would be better off without a "belief" system. But before religion is relegated to the trash heap of human progress, don't you think it would be a good idea to see what selective benefit it afforded us?

Hope R: Throughout history skeptics in the field of anthropology have denied the existence of many cities and events described in the Bible, only to have them discovered, uncovered, and confirmed by people in their own field. To quote Bill Boyd, "Faith goes beyond the evidence, but not against it."

Alice L:  But there is a bias against faith-talk in the scientific and academic communities, often even open hostility. I've experienced it. My research has been called a "mixture of faith and reason" which was meant as a slight, but which some might take as a compliment.  Still, you have to wonder about the dismissal of belief or faith. Every scientist operates on belief and faith of some kind, if nothing else than the faith that the laws of physics will be the same tonight as they were this morning.

Beside an anti-faith and anti-Bible bias, there is ignorance of the Bible and the usefulness of biblical data in making connections. Or the problem is unexamined assumptions about what the Bible says, often on the part of people who have never read the Bible. For the most part, Americans are biblically illiterate. Even church-goers according to Gary Burge, professor of New Testament at Wheaton College (Illinois). Burge is astonished by the ignorance of the Bible among the students who come to Wheaton from "Bible-believing" churches. He says, “If it is true that biblical illiteracy is commonplace in secular culture at large, there is ample evidence that points to similar trends in our churches."

Susan B: How very disappointing that Biblical Anthropology is not an accepted scientific field of study! I have been knocking at that door for many years but have been either ignored or belittled. Biblical anthropology is my passion but, unfortunately, not my career path. Until a few days ago, I didn't know we were allowed to connect those two words together.

Marty P: Biblical anthropologists start out by ignoring existing data or by assuming they are the first scholars in history to pay attention to such things as locations and genealogies! I agree with the atheists to the extent that the Mesopotamian myths are remarkably similar to the stories in Genesis 1-11. The parallels cannot be denied. I don't think Genesis is derived from those myths, but contains parallel accounts of the same historical events.

Alice L: That is an example of how a false assumption can cause confusion. Close analysis of the Gilgamesh Epic and the Genesis Flood narrative reveals that they are not similar in any detail except that both have a hero who overcomes the chaos. The Genesis creation and flood stories find their closest parallel in African narratives. The details are sometimes startling! The motifs of the tree of life, the serpent, the first parents, God walking on earth - all these originate in Africa and spread across the Afro-Asiatic Dominion. But now we have to ask: are we leaving science when we compare and contrast legends, narratives and myths? Or is comparative mythology simply another tool in the anthropologist's tool box? Can any science make progress without drawing on other disciplines?

Marty P: Interdisciplinary studies have long been conducted into the engrossing and popular topic of Middle East history. Christians, Jews, Arabs, Persians (Iranians) and secular scholars are all intensely interested in this part of the world. Scholars are so interested in all aspects of research that some of the early Middle East history experts found themselves trying to master all related scholarly disciplines. Consider, for example, Professor William Albright, described as follows:

"The fields of scholarly research that Albright controlled were vast and included archaeology, Semitic linguistics (including all branches of the great family of languages, especially the numerous dialects of Northwest Semitic, but not neglecting Akkadian and Arabic), epigraphy, orthography, ancient history, chronology, historical topography, mythology—in short, all facets of ancient Near Eastern civilization from the Chalcolithic period (ca. 4500 BCE ) through the Greco-Roman period."

Froilan S: Or Noel Freedman, a Jewish Bible scholar and well known in biblical archaeology. He says there’s a difference between the Jewish understanding of Genesis and the Christian understanding of Genesis. In the Jewish perspective Genesis is all about how the Israelites lost the land, lost the temple, and how they were in exile. Genesis is all about the story of Israel and God’s covenant with the Israelites. Genesis can only be interpreted by way of allegory, not by way of history. What’s your opinion?

Alice L: Later in his life, David Noel Freedman admitted that his allegorical scheme didn’t work perfectly. He and William Albright contributed greatly to the world’s understanding of biblical texts. They were masters in their fields but also willing to admit that not all the evidence aligned with their theories. Freedman once said: “The Hebrew Bible is the one artifact from antiquity that not only maintained its integrity but continues to have a vital, powerful effect thousands of years later.”

In the end, the Bible is as reliable and useful a resource for anthropologists as it is for Bible scholars and biblical archaeologists. But we have to keep an open mind.

Susan B: Here’s a case in point: Cyperus Esculentus is a C4 sedge and Ardi was found to have traces in molars (http://sci.tech-archive.net/Archive/sci.anthropology.paleo/2006-11/...). Chufa (Cyperus E) is a rhizome with underground storage units with protein levels equal to chimp food and much less fiber content than that consumed by chimps (http://books.google.com/books?id=vhoRdbTrjc8C&pg=PA573&lpg=...). Also, Ardi was found with many pig bones and pigs are tuber feeders. Whether Ardi consumed the pigs or not is irrelevant to the point that pigs were able to find food.

It just seems to me that chufa is a primary candidate for Paleolithic food source shared by apes, proto-humans and humans alike. Why discount it simply because it appears in the Bible? Instead of looking in remote China for the source of C4 sedge why don't they look in front of their noses? Pardon the sarcasm. C4 sedge grows in swampy areas much like rice. It is one of the oldest domesticated plant species if not the absolute oldest.

Alice L: And it grew all over the swampy grasslands of west central Africa before the Sahara started to dry out. That’s another example of how European and American researchers tend to ignore Africa when making connections. Even "Bible-believers" ignore pertinent data, such as the fact that one of Abraham's ancestors was Nimrod, the son of Kush. Kush is the ancient name for the eastern part of modern Sudan around the Upper Nile. It also designates a number of distinct people groups, such as red and black Nubians and Ainu. 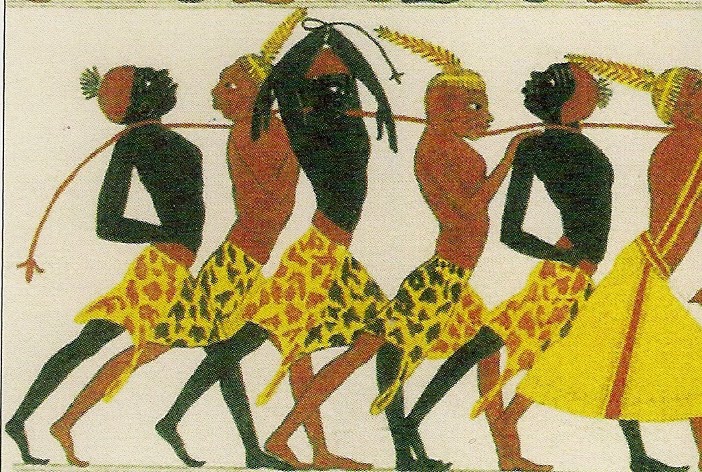 I’m reminded of how anthropologists have ignored Thomas Strasser’s work on Crete. He and his team have discovered hundreds of stone hand axes dating to 130,000 years and they are identical to hand axes fashioned in Africa about 800,000 years ago. He believes that ancient Africans used rafts or other seagoing vessels to cross from northern Africa to Europe and the Near East via larger islands in the Mediterranean. This is what the data in Genesis indicates: that Abraham's ancestors came out of Africa and were great explorers and kingdom builders. Nimrod, who was from Kush (ancient Sudan and Upper Nile) left Africa and built a kingdom for himself in Mesopotamia though he lived much later than Strasser’s seafaring explorers. Although in the Bible we first meet Abraham in Ur, his ancestors came out of Africa. Biblical anthropology can help us reconstruct the African cultural context of Abraham's ancestors. In fact, it may be the best science to undertake that task.