The Jebusites have living descendants whose culture, religious beliefs and kinship pattern can be studied today among the Ijebu, a Yoruba people living in Nigeria. This is true of many of the tribes and clans mentioned in the book of Genesis who ancestors spread out of Africa to other continents. For example, there are connections between the Edo of Nigeria and Benin and the Edomites of Petra. The title of their rulers is evidence. The ruler of the Edo is called "Oba" and the first ruler of Petra was the deified Nabataean King Obodas.

This means that peoples who have been regarded as extinct or lost have living descendants who can be traced and studied. These "first peoples" cling to the traditions of their ancestors which means that their present practices and beliefs can shed light on biblical practices and beliefs. Such is the case with the Ijebu who appear to be the living descendants of the Biblical Jebusites.

It is probable that the Jebusites were a Nilotic people originally. Some migrated westward along the connected water systems of central western Africa and settled at the confluence of the Niger and Benue Rivers in Nigeria. Here their rulers controlled the major water ways at the conjunction of the rivers and the Atlantic near modern Lagos. This was documented as recently as 1892 in the New York Times. The New York Times reported on the Jebu control of the water ways of the Port of Lagos. The king of the Jebu levied taxes on all products carried through his territory. This is consistent with the biblical information concerning Abraham’s ruler-priest ancestors who controlled water systems in Nigeria (where Jebu still reside), Canaan and Mesopotamia.

The Jebu also moved eastward into the land of Canaan where Melchizedek, the ruler-prist of Salem (Jerusalem) lived in Abraham's time (Gen. 14:18). Jerusalem was a Jebusite city when David took control of the oldest and highest areas. This is why Abraham payed tribute to Melchizedek and received a blessing from the great ruler-priest (Gen. 14:18-20).

Among the Jebusites there are two main governmental divisions: the Nago-Jebu and the Ketu-Jebu. Of the Ketu-Jebu there is a good deal of information in Genesis. This division resided in Palestine and Arabia. Abraham payed tribute to the Ketu-Jebu priest Melchizedek, who was the ruler of the Jebusite city of Salem (Jerusalem). Abraham's second wife, Ketu-rah was of the Ketu-Jebu, as evidenced by her name. She resided at Beer-Sheba, which took its name from the ruler Sheba who controlled the well there. (Beer means well.) Keturah's firstborn son was Joktan (Yaqtan), and early ruler in Arabia where the the Joktanite clans still reside. 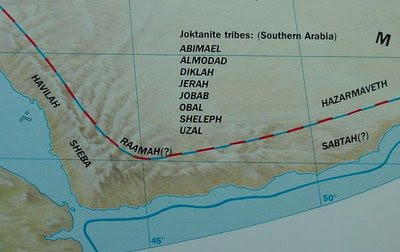 The western boundary of the Jebu is marked by a 1000 year old rampart that is 70 feet high and 100 miles long. The British archaeologist Patrick Darling is credited with drawing world attention to the discovery of the Eredo system of walls. He reports, "We are not linking what we found to a city, but to a vast kingdom boundary rampart."﻿﻿

The Eredo ramparts are located to the south-west of the Jebu town of Ijebu-Ode in Ogun state in southwest Nigeria. This is the largest single pre-colonial monument in Africa. Local people link the Eredo boundary walls to Bilikisu Sungbo, another name for Sheba, according to Dr Patrick Darling. This discovery confirms the biblical genealogical data that links the clans of Sheba and Jebu (Afro-Arabian peoples).

Itsekiri, an eastern Yoruba dialect, is said to be close to the original Jebusite language.  These Yoruba also recognize Hor (Horus) as a great deity and their connection to Nubia and ancient Egypt has been well established linguistically.

Study of the living Jebusites enables us to trace the origin of certain enthronement practices, such as the use of palm fronds. The two Jebu in Nigeria have two divisions: Jebu Remu and Jebu Ode. The supreme ruler of both is called "awujali” and he is installed with palm branches.

Jude Adebo Adeleye Ogunade writes in his memoir about growing up Ijebu. He was warned not to touch the leaves of the Igi-Ose tree, because as his Mama Eleni explained: “That tree is the tree whose leaves are used to install Chiefs and Kings of Ijebu and as your grandfather was a custodian of the rites of chieftaincy and kingship you must not play with its leaves.” (It is interesting, given the significance of Jesus' blood, that this plant is a blood purifier according to The University of Oxford, 1937 Institute Paper, no. 7 on Medicinal Plants; reference HA1k).

Fresh palm tree fronds are used ceremonially at the installation of chiefs and kings and are used to decorate places of worship. When the people of Jerusalem used palm fronds to greet Jesus as he entered the city, they greeted him as one to be enthroned. To this day, the Ijebu use fresh palm fronds when greeting and installing a ruler or  high priest.